Hi everyone, Blitzy here! My final day in Hong Kong was dedicated to enjoying all the local art and crafts. Despite being a fairly small city, there are several art museums here, and the main one is the Hong Kong Museum of Art, an imposing and wonderful building located in the tourist district Tsim Sha Tsui (you can see it in the photo>>>). That’s where my tour begins.

A Home for Local Art

HKMoA is a very large museum boasting a collection of over 17,000 items. The main exhibitions are a showcase of Chinese and Hong Kong art and sculpture, from antique artifacts through to post-modern Chinese art. There is a tea-ware collection, displaying rare and unique items which show how important the tea ceremony is in Hong Kong culture. There are also beautiful displays of Chinese painting and calligraphy, which I found especially interesting.

Calligraphy and ink wash painting are prominent styles of art both in Hong Kong and in mainland China, and I found it so mesmerizing I decided to learn a bit more about it. Painting and writing with ink is considered to be a higher art form, and so the artist learns not just about the visual aspect of their subject, but the essence of it as well, thereby capturing the spirit of the words or scene. Before placing the brush on the scroll, the artist will enter a meditative state in order to be able to focus completely on what they are doing. The art itself is almost sacred, so once a stroke is painted, it cannot be changed or erased.

When it comes to the materials, they are also regarded with great importance. Artists spend years learning how to precisely use each type of brush and the best way to use the ink to ensure a smooth stroke. The artist will have his or her own favorite method for grinding the ink sticks and mixing to the right consistency with water. The brushes themselves are very specialized, and craftsmen work for many hours to create the perfect brush according to the requirements of the artist. They can cost as much as $2000 and artists will have several different brushes to suit different moods and subject-matter. Even the paper used for calligraphy is a specific type, known as Xuan - the best quality version involves 18 steps to make! 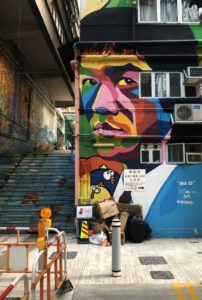 Not all of the art in Hong Kong is inside museums and workshops. The next stop on my Hong Kong art tour was around the streets of the city itself! Graffiti has become very popular as a form of expression and appears on many buildings, especially in the busier districts. There is plenty of casual graffiti, which isn’t particularly nice to look at, but large murals are becoming more common and often very colorful, setting the tone for this vibrant city.

Some of the themes in Hong Kong graffiti are political satire, local culture, and caricatures of famous people. It has even been used as a cheap form of advertising, and this has led to it becoming a distinct style specific to Hong Kong.

Although graffiti is officially illegal in Hong Kong, it is rare for the law to be enforced, which has left the way open for true graffiti artists such as Tsang Tsou Choi to practise their art undisturbed.

Lighting up the Sky 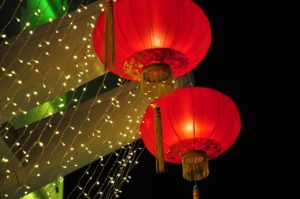 Lanterns and lantern-making are an important part of Chinese and Hong Kong culture. The lanterns are used in several festivals throughout the year, in particular the Spring Lantern Festival. For this festival, the color red abounds, as it is considered to bring luck. Lanterns can be made from paper or silk, or other fabrics such as nylon. Some lanterns are designed to be decorative and hang outdoors, and these often include carvings, calligraphy and tassels to make them more appealing. A special type of lantern called a sky lantern has an opening at the bottom for a candle, and the heat of the candle causes the light paper lantern to fly up into the air, symbolizing the owner releasing old problems and preparing for the new year. When many festival-goers release them at once, the sky is lit up by hundreds of beautiful lanterns.

And now it’s your turn to get crafting. You can make your very own Blitzy lantern with this special download. Let me know how it turns out!

« Hong Kong Culture, Games and Bingo Back to News Eating out in London »
Share