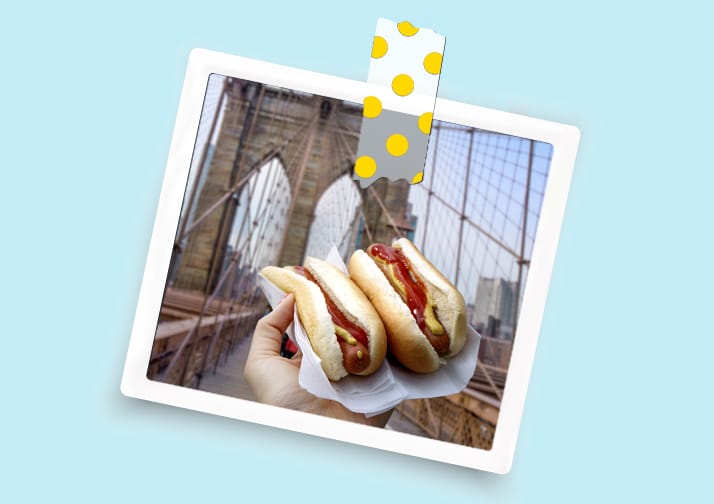 Hi everyone, Blitzy here! I just have time before my next meal to tell you about my foodie adventures in the Big Apple! Checking out the cuisine in New York City is a bit like going on a world tour. That’s probably because New York is a harbour city, the gateway to the United States, and so over the years, many different people from many different cultures have stopped here on their way into America and left a bit of their food heritage behind.

New York cuisine offers something for everyone

There’s the $2 hot dog from the street-corner stand, and the iconic diners with their all-American menu. There are cheap-and-cheerful dishes for students on a budget and fancy bistros for business meetings. And for those looking for the ultimate food experience, there are even Michelin-starred restaurants, those that achieved the top cuisine awards. I made it my business to find out about all of them and try as much of the food as possible (it’s hard work being a bingo cat superstar!!) so that I could tell you all about it.

The melting pot of New York cuisine is truly global: think Chinese dimsum and Hungarian goulash,  Spanish churrasco and Middle-Eastern falafel. But the foods which are most associated with New York come from those cultures who place the highest level of importance on the foods they eat, in particular the Italians, who brought pizza, bolognese and gelato to the City (and many other dishes too), and Polish Jews, who brought bagels with lox, matzo-ball soup and knishes amongst others.

When it comes to foods which people identify with New York, it’s not just the ingredients themselves which are important, but the people who prepare and serve them, and even the setting. One of the most iconic food images connected with NY City is the ubiquitous hot-dog stand. These can be seen on street corners, at ball games and occasionally near the popular bingo halls!

These are not the only famous foodie sights in New York. ‘21’ Club in “Sweet Smell of Success” Katz’s Delicatessen in

“When Harry Met Sally” Tom’s Restaurant in “Seinfeld” are three examples of New York diners which have been made famous by appearing in movies or TV shows. In fact, you can do a whole tour of movie-famous NY eateries! It’s so much fun to sit in a buzzing diner knowing that some of the world’s most famous movie-stars have sat in the exact same place! And even better, you get to enjoy some great food too!

The final stop on my Big Apple cuisine tour was to try out a different style of restaurant. There are 68 Michelin starred restaurants in New York City, split into categories of either one, two or three stars. All of these are considered to be in the top level of eateries, but of course the very rare 3-star restaurants are the most famous (and have the longest waiting list!) Michelin stars originated in France as a way to encourage families to drive further afield with the temptation of delicious food, but over the decades it has become a global phenomenon and taken on a life of its own. There are just five restaurants in NYC which have received the highest accolade of 3 stars, including Le Bernardin and Eleven Madison Park.

For a bingo fan such as myself, the important thing when it comes to food is that it is tasty and fun to share with friends. It’s a bonus if it’s easy to eat and play bingo at the same time, so for this month’s New York-inspired bingo evening idea, I am sharing a great recipe for a deli-style mega sandwich. 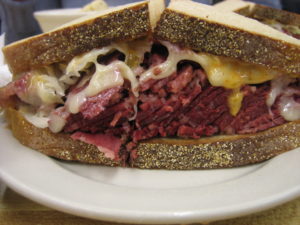 Hopefully you have your NYC double-decker ready to go, so you can head over to Bingo Blitz and put this gift to good use!

« Sports, Games and Bingo in New York Back to News A Very Special Bingo Blitz Trip Around New York »
Share