Hi everyone, Blitzy here! You probably already know what a foodie I am, and that means trying all sorts of delicious dishes in all the fascinating places I visit. So I was game for this month’s cuisine too, even if it meant eating all sorts of insects and animals that I didn’t realize could be eaten!

But it’s not all kangaroo meat and witchetty grubs: I got to taste some great local beers along with some very strange modern foods (Vegemite, anyone?!) Keep reading and you can hear all about my Aussie culinary adventures! 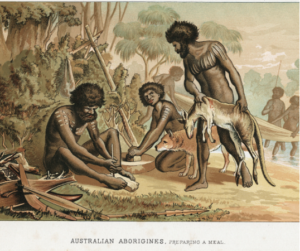 Bush tucker is the official name for foods which were the traditional diet of the indigenous people in Australia. There used to be an estimated 5000 different local fruit, vegetables, herbs, spices, animals, birds and insects included in their varied and nutritious diet, but when the colonists arrived with non-local animals, much of the vegetation was affected and some habitats were even destroyed, causing a deficit in the supply of many elements of the Aborigines’ ancient diet.

It took more than 150 years of colonialism for non-Aborigines to begin to appreciate just how nutrient-rich and tasty these traditional dishes were. In the 1980s, recipe books and articles began to appear, showcasing bush tucker and turning it into an industry, which has placed it right back in the center of Australian cuisine.

Some bush tucker ingredients have become mainstream, such as kangaroo and macadamia nuts. Others are served in restaurants, so non-Aborigines are familiar with them but don’t necessarily eat them on a regular basis. These include goanna lizards, riberry fruit and mountain pepper. There are some foods which are either too difficult to grow commercially, or too complicated to process on a large scale, and so these are generally only eaten by indigenous Australians. These include bunya nuts, bush bread and witchetty grubs.

The last item on that list is one of the foods most associated with bush tucker after becoming popularized by TV shows. Witchetty grubs get their name from the ancient Aboriginal term “mako witjuti” which refers to several types of moth larvae, which can be eaten raw or cooked. They are high in protein which makes them a valuable part of a nomadic diet. I wasn’t too keen to taste them raw, but I tried the cooked version which were nice and crisp, much more tasty than I expected!

“I’m stoked with this bevvie!!”

Or for any non-Australians, “I love this beer!” My Aussie friends taught me some of the local slang as we enjoyed a few coldies together - what a fun evening we had! Beer was introduced to Australia by the colonists, and over the years, the locals have created their own versions which have become popular throughout the world. One of the big differences is that Aussies drink their beer ice cold, as opposed to the English who originally brought beer over, who served it at room temperature (that’s not a local favorite!)

The best-selling beer in the country is Victoria Bitter, named after the state where it’s brewed. There are other household names including Castlemaine, Cascade and Tooheys. But the beer which is most commonly purchased outside Australia isn’t really popular with the locals: Fosters has been named as one of the top ten best-selling beers worldwide, but it’s almost exclusively brewed for the foreign market!

What will you opt for when you come to visit Sydney? I definitely recommend going out of your culinary comfort zone and trying the traditional Aborigine dishes. But for those of you who are taste-timid, there are plenty of great restaurants to visit, and modern dishes to enjoy.

As for me, I’m heading back to the bingo hall now, I am so full after my foodie tour, I’m ready to enjoy a game with my new cobbers!

« Toys, Games and Sporting Fun Down Under Back to News Old meets New »
Share